These images began life as photos in a Vancouver Sun newspaper supplement, "Babies of the Year 2000". Blank slates for the new millennium...

From the outset I knew that I wanted the baby image to be more or less sacrosanct. No matter what the paint did, I wanted to still be able to read it as the head of a child and let the picture resonate from that point of departure. It's about how the paint marries the image. Twenty paintings into the series, the trick has been trying to create a space where the two concerns push at each other: where the paint conveys the image (hair, eyes, mouth) while in the same place the paint decides to just be paint: colour, light, texture, the material itself. Because that's where the baby heads start to do interesting things: where the image dances between archetype and persona, the idea of a baby and the expression of a baby; and where the paint finds play between the concrete and the metaphysical- the very thing that constitutes the mysterious life of a painting.

To read more check out the short interview on Living?s at: 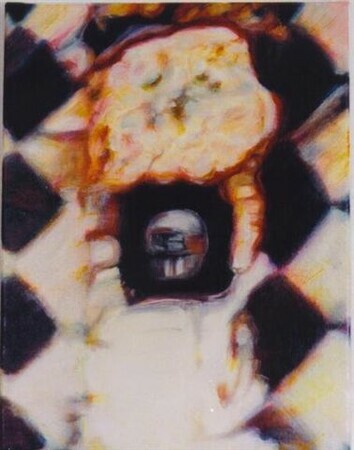 I worked on the Queen Mother series for  ten years, producing over twenty paintings (several I've since destroyed). They are based on televised images from the public funeral of Queen Elizabeth The Queen Mother which occurred on Tuesday, 9 April 2002 in Westminster Abbey in London. The series probably has far more to do with ceremony and visual symmetry than Queens or Mothers. The "God's-eye" visuals of  Westminster Abbey were stunning and I immediately wanted to use them as the starting point for paintings. Still, over the years I’ve come to the strange conclusion that the funereal pace and design of a televised funeral is probably more in sync with my visual concerns as a painter than just about anything else TV has to offer. The televised State funeral is one of the only times TV invites us to contemplate the nature and meaning of what we are seeing, to recognize in the images of these ceremonies and processions the universals of life and death, of time and its passage. It is one of those rare occasions when the images shown are given the opportunity to become subservient to the mystery of the event unfolding. Things slow down. Eternity is depicted in the stillness of the moment, made all the more poignant, perhaps, because it is experienced through a medium that begrudges stillness and silence.